The heart of a DRSSTC is a pulsed IGBT inverter which generates the RF necessary to drive the resonator. This article discusses the considerations pertaining to the design and layout of a good inverter.

The DRSSTC is driven by a series-resonant half or full-bridge inverter; that is, the load network is a series LC circuit. The inverter's control circuitry ensures that the inverter switches at the resonant frequency of this load network, thereby ensuring that the switching occurs at the zero crossings of the load current ("ZCS", or "soft switching"). This has several benefits:

1. Recall that the switching loss in a switch is proportional to the current flowing through it when it switches. By soft-switching the inverter, this loss can be miminized. DRSSTC's typically operate at several hundred to a few thousand amps of primary current at tens or hundreds of kilohertz; if the inverter were hard-switched, the switching loss alone would exceed the device dissipation ratings by an order of magnitude.

2. Reduced switching transients and EMI. This is an oft-quoted benefit of resonant converters in industry, but it is seldom mentioned in the coiling world; however, it should not be overlooked. Recall that during switching, the current stored in the parasitic bus inductance results in a voltage spike of magnitude equal to LdI/dt when it is interrupted; this spike, when not controlled, can easily result in device destruction. In order to control this spike, we can reduce L (which is bounded below by bond wire inductance, capacitor ESL, and the physical sizes of the components), increase dt (which helps, but generally is a tradeoff with switching loss), or reduce I. Soft-switching ensures that the current is at a minimum during switching, thereby reducing the magnitude of this spike. It also minimizes radiated EMI, which is helpful for keeping noise from disrupting the control electronics.

A typical DRSSTC does not operate anywhere near the thermal limits of its devices (this would correspond to dissipations of a couple hundred watts per device for a small coil). However, any deviation from ZCS results in greatly increased voltage spikes (even the best-designed of bridges has some parasitic inductance!); this will easily result in IGBT failures. For this reason, it is of paramount importance that ZCS be maintained during operation.

DRSSTC design typically begins by selecting a desired peak current and secondary resonant frequency, which in turn places constraints on which devices are suitable. Peak current is constrained by the desired spark length; as a guideline, in a half-bridge coil operating on a 400V bus, 300A is good for 2', 500A is good for 4', and 800A is good for 6-7'. This scales somewhat linearly with bus voltage, and by extension, to full-bridge coils (which provide double the voltage swing). However, this scaling is only approximately linear; for example, a typical large coil produces 12-15' using 1500A, 600V, and a full-bridge, and the largest DRSSTC to date (Ward, Blake, and Larson's "Gigantor") needed four interleaved full-bridges carrying a total of 6kA to produces 20' streamers.

The resonant frequency is primarily constrained by the desired coil size. For a given wire gauge and topload, smaller secondaries have higher resonant frequencies. The resonant frequency can be decreased by using thinner wire; however, thermal constraints imposed by I2R losses in the secondary place a lower limit on this as well. For a small coil, this limit is at about 40AWG (thinner gauges are difficult to handle as well); for mid-sized coils, this limit is at about 30AWG. Similarly, toploads cannot be made arbitrarily large, as a large topload is both bulky and reduces the spark performance by limiting the electric field. JavaTC can be used to precisely calculate the resonant frequency of a secondary and topload (keep in mind that for thinner wires, wire varnish can increase the diameter by 20% or more).

Eon, Eoff, and Ets should be ignored; they are used for calculating the switching loss in hard-switched converters. The turn-on delay and rise times can be ignored as well for the purposes of switch selection; instead, the main constraint is usually td(off), the turn-off delay time. This value is the time it takes for the current to start falling after the gate voltage reaches zero. There are two important things about it:

As a rull of thumb, td(off) should be no more than 5% of the total cycle length if the driver lacks phase lead, or 10% if the driver uses phase lead. Once suitable IGBTs have been found based on the switching times, one with suitable current rating, package, and price should be selected. The nameplate current rating of a device is largely meaningless in pulsed duty; the pulsed rating is slightly more useful. However, recent IGBTs give a pulse rating of twice the continuous rating, largely invalidating it as a method of device selection.

At such high currents, IGBTs generally degrade over time. Therefore, selecting a maximum operating current for any given device is generally a trade-off between reliability and price, and requires some experimentation. The following is an incomplete list of some IGBTs which are known to perform well.

In a typical off-line switching power supply, the bus capacitors act as filters for the rectified line voltage, smoothing it to give a constant DC voltage. The bus capacitors in a DRSSTC serve this purpose, but they also serve as energy storage. Due to the low duty cycle and high peak powers found in a DRSSTC, all energy during a pulse can be treated as coming from the storage capacitors; the line impedance is so high that little recharging of the capacitors occurs during a pulse.

Other than capacitance and voltage ratings, there is little use in being selective between different available capacitors; most modern electrolytic capacitors have similar ESR, ESL, and ripple ratings (and the ripple ratings are always exceeded by an order of magnitude anyway). Rather, availability, package, and price should be the main deciding factors.

In many DRSSTCs, in addition to the energy storage capacitors, there is also a low-value, low-ESL film capacitor placed near the switches. This capacitor (the "snubber") serves to absorb any switching transients (since spikes would have to have enough energy to charge the capacitor first). In addition, it serves to reduce the ripple current drawn from the electrolytic bus capacitors, since it has a lower AC impedance. This capacitor is absolutely necessary on large coils; the inherent large size of the high-value capacitors they use means that they have high ESL, and no electrolytic capacitor can source the thousands of AC amps necessary to supply a large bridge. In this case, 1-20μF (more is better, but such high-value film capacitors are rare) placed at the switches can help mitigate the transients. For IGBT modules, there are specific models of capacitor which mount on top of the screw terminals: 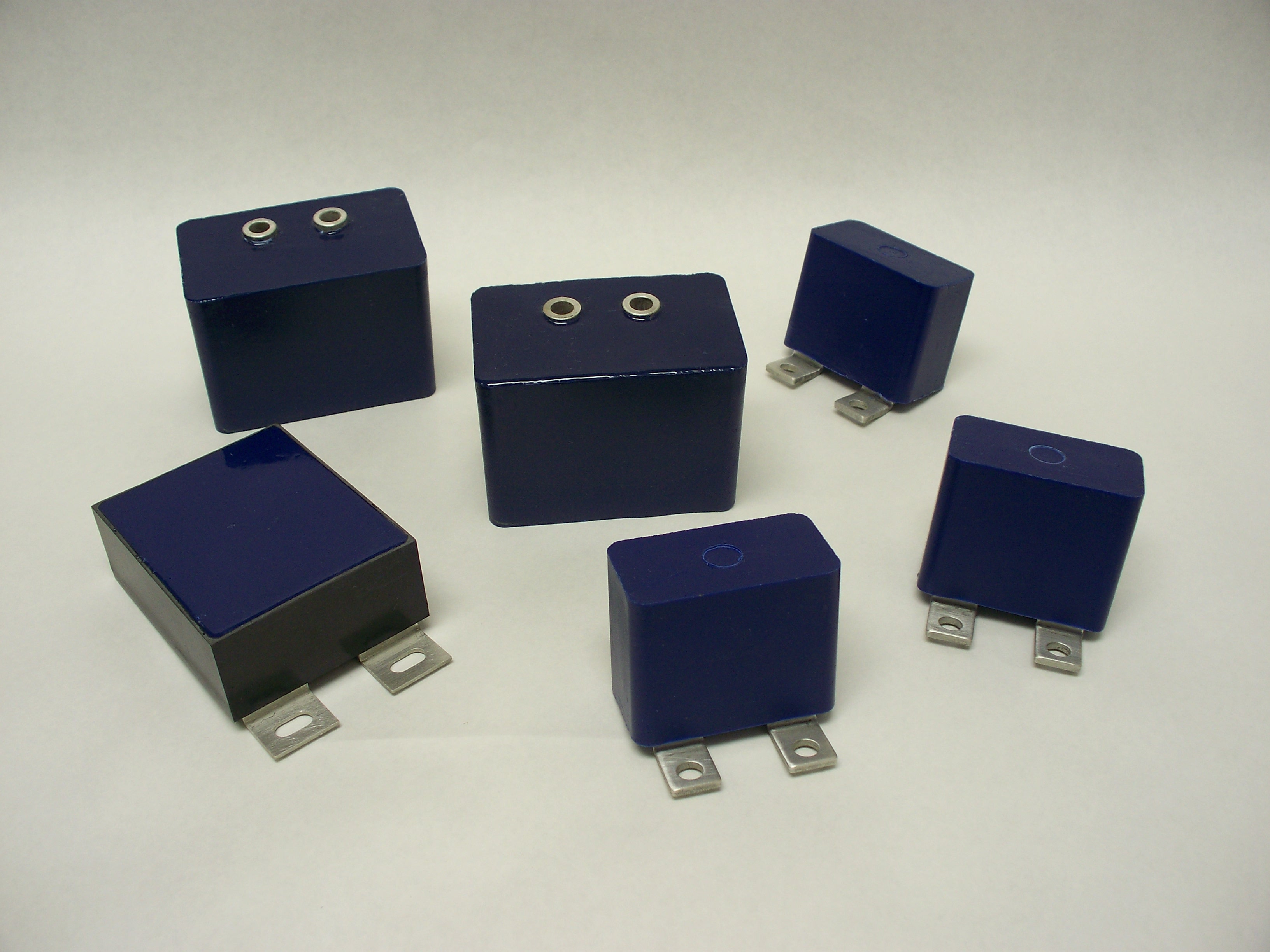 For smaller coils, this capacitor is optional. The trace lengths and ESLs involved are usually low enough so that spikes are not an issue. Having a capacitor, however, can serve to reduce heating due to AC losses in the bus capacitors.

A good bridge always minimizes the size of the loop between the bus capacitors and the switches; this keeps the parasitic inductance at a minimum. This means that long runs of wire should be avoided; in fact, wiring should be avoided altogether, in favor of busbars or copper sheet, which has a lower inductance and often a lower resistance as well.

The best way to keep inductance at a minimum is to use a laminated bus, which simply means to stack the positive and negative busses on top of each other. For a PCB, this can be achieved by simply making the positive bus a power plane on one layer of the board, and the negative bus a power plane on another layer of the board. For larger bridges, busbars should be machined to fit the IGBTs used; these busbars can be separated by a thin layer of plastic or fiberglass.