Thermal analysis forms the core of DRSSTC design. Due to the extremely high peak reactive powers found in a DRSSTC, we typically do not care much about efficiency - because there are typically hundreds or thousands of KVAR circulating in the tank circuit, even low percentage losses would lead to switch destruction. Instead, we care about operating within bounds that do not permanently damage components.

Fortunately, thermal analysis is extremely easy. We can model all thermal interfaces as resistances; these are quoted in °C/W. Heat sources (such as the dissipation from a transistor) are modeled as current sources, and the potential of an element with respect to ground (which represents the ambient temperature) gives us its steady-state operating temperature.

For example, consider the following structure: 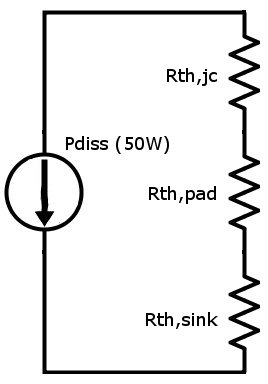